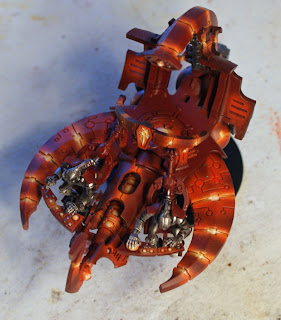 So yes, I haven't posted in a while, but I have plenty of excuses:

So there we have it, my bullshit list of excuses!  However, I did jump into the world of airbrushing (well, for something other than base coating that is), and this is what turned up.  This will be the color scheme of my Necrons, whenever I get around to them.  After the holidays, it's crunch time on the Thousand Sons, so the metal bad asses will have to wait >.<  Anyways, as usual, more pictures below! 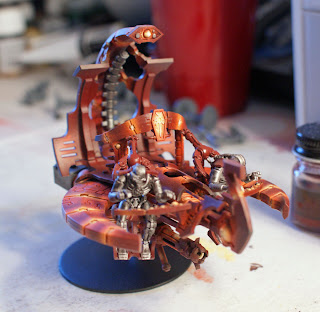 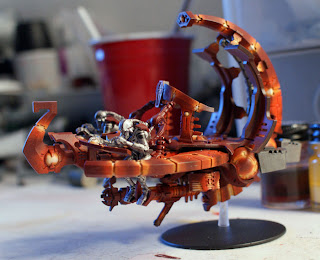 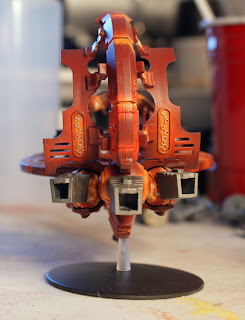 So yes, I need to work on the actual Necrons themselves a bit.  The overlord isn't even built in fact, since I don't know what I intend to do with him.  I also need to go back over areas where the wash pooled on the model.  You can see it mostly on their arms.  It's pretty terribad to be honest.  But oh well.  All said and done, I ended up using 2 shades of red to base coats, and 5 shades of orange for the detail work.  The "fluff" I am building for these guys is that way back in the day, they were on a newly formed volcanic planet.  Hence the colors.  But now for the twist!!!!!  Since their millions years sleep (or however long it's been, doesn't matter), the planet has slowly drifted away from the stars habitable zone, so it has slowly become an ice world!  (TWIST! TWIST!)  So that being said, I am going to be doing snow bases for them.  I think that the bright white bases, with dark soil, will contrast the models themselves in a nice way so that the bases are noticed, yet don't detract from the models themselves.  Plus I haven't had a real go at using snow effect before, so it should be "fun."

Anyways, we'll see how Christmas fares for me, so until then, may your holidays be bright, and you games pathetically easy!

Posted by Damn The Valley at 12:13 PM
Email ThisBlogThis!Share to TwitterShare to FacebookShare to Pinterest
Labels: Necrons, news, WIP

Some stuff I read